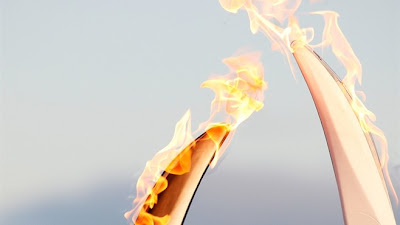 I hadn’t been particularly enthusiastic about the coming of the Olympics to our city – I was rather apathetic, in fact. However, the day before the Opening Ceremonies, I found myself watching some of the torch relay on tv, and suddenly something odd was happening in me. I realized that, out of nowhere, I was feeling an inordinate amount of excitement about the event – like the past 7 years of anticipation had finally caught up with me, all at once. But it wasn’t just patriotic pride coursing through my veins; there was a strange anxiety attached to it – I suddenly felt almost DESPERATE to find a way to glimpse the torch going by.

It was such an out-of-character response for me that I started to question why it was that I was feeling so strongly about this, and I quickly realized that I was chasing a ‘high’ – the rush of being a part of something bigger than myself. Now, I don’t think that there’s anything particularly wrong with that feeling – there’s something truly beautiful about that sense of unity with thousands upon thousands of other people that one would normally feel completely detached from or oblivious to. But I knew that I was longing for that high to fill a place in me that can’t be filled by anything manmade.

Over the last several years, I have inadvertently allowed my connection to God to grow somewhat distant as I’ve outgrown my old way of ‘doing Faith’ but haven’t yet found a new way to believe. I felt the need to toss out almost everything I had learned and start from scratch, building my faith from the ground up again, as an adult, so that I knew that it was authentic and not just inherited. In the midst of my searching, though, I fear I’ve become rather inward-focused.

As I’ve been trying to find my way back into closer relationship with Him again, one of the Christian themes that I haven’t been able to discard and that continues to arise for me is that of service. Giving of myself is one of the things that immediately makes me feel like I’m in close communion with God again. It takes me out of myself, and I experience Love and Beauty. It puts everything back into proper perspective.

That Friday, when I was so desperate to go see the torch, I decided instead to go visit my lonely, aging grandpa. And it was so much more soul-satisfying than catching a glimpse of the Olympic flame would have been.

So for Lent this year I decided to try to ‘give up’ my self-absorption, in a small way, by intentionally finding one way, for each day of Lent, to give to someone else. I’m no Mother Teresa, but so far my little acts of service or love have been bringing me closer to the heart of God than I’ve felt for a long time.
Posted by Aimee at 1:00 AM