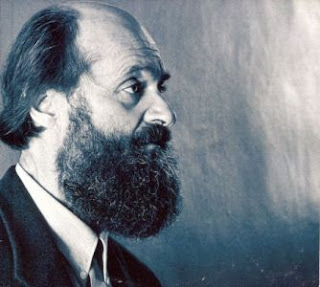 This is Arvo Pärt.
Pärt is an Estonian classical composer who has been composing since the 1970's. Often utilizing simple harmonies, single notes, and large amounts of space, Pärt prefers a pure, minimalism in his compositions. This slow, meditative approach is captured in something he calls tintinnabuli - which Pärt describes as being like "the ringing of bells". One of the first pieces Pärt wrote in this tintinnabuli style, was Fur Alina which was composed in 1976.

Fur Alina appears very simple. The score is only two pages long and the majority of the notes found in the piece are whole notes. There are only 15 bars of written music and there is no time signature given. For a tempo marking, the following is written: ‘Ruhig, erhaben, in sich hineinhorchend’, which roughly translates into ‘peacefully, in an exalted and introspective manner’. The song is played with the piano pedal down, save for the last 4 bars, creating a floating and expansive sound. Everything about the piece, from its composition to performance, invites the listener to dwell - inside the notes and in the silence.

In describing his process of tintinnabuli, Pärt said:
"Tintinnabulation is an area I sometimes wander into when I am searching for answers—in my life, my music, my work. In my dark hours, I have the certain feeling that everything outside this one thing has no meaning. The complex and many-faceted only confuses me, and I must search for unity. What is it, this one thing, and how do I find my way to it? Traces of this perfect thing appear in many guises—and everything that is unimportant falls away. Tintinnabulation is like this. Here I am alone with silence. I have discovered that it is enough when a single note is beautifully played. This one note, or a silent beat, or a moment of silence, comforts me."

I think Lent might be a bit like tintinnabulation - a season we wander into, looking for answers, hoping that everything that is unimportant will fall away. Drawn out of the clutter and noisiness of our lives, in the silence we can be comforted and know that it even one note beautifully played, is enough. Listen to Fur Alina here

"Silence is disturbing. It is disturbing because it is the wavelength of the soul. If we leave no space in our music—and I'm as guilty as anyone else in this regard—then we rob the sound we make of a defining context. It is often music born from anxiety to create more anxiety. It's as if we're afraid of leaving space. Great music's as much about the space between the notes as it is about the notes themselves.” - Sting


* Artisan will be listening to Arvo Part's Passio on Good Friday - all 70 minutes worth! See artisanvancouver.ca for more details.
contributed by Lance
Posted by LCO at 12:00 AM