contributed by Robin
I have to confess, I have a hard time with Jesus being human. I comprehend his divine aspects without too much trouble, but my brain can’t seem to grasp that my saviour was once an eating, laughing, walking, talking, pooping person (and yes, I probably will mention poop in all of my posts). I think I put up this mental barrier because I feel guilty for not being more like Jesus. You see, it’s easy to feel okay about not being more like God, so much of God is a mystery that I can’t even imagine what it must be like to be Him. Not being like Jesus, that’s tougher, because I can actually imagine what his ‘human’ experiences on earth were like – I know the soreness of feet that have walked in sandals all day, the frustration of trying to teach a friend who just isn’t getting it, the look of those broken by poverty as they ask you for help, the taste of a meal enhanced by the company of new friends. So, to avoid feeling that Jesus did a much better job with his life than I am, I mentally avoid the acknowledgement such similarities between us - which is easy most of the time. There have been a few times when my efforts have been thwarted unexpectedly, Jesus gently pushing at that sore spot in my heart that doesn’t want to compare myself to him.

Most recently this mental barrier was broken by a painting by Caravaggio. I was sitting in Art History 102, focusing on staying awake as the instructor rambled through her PowerPoint on 17th century Italian art. My brain was idling, the caffeine in my morning cup of coffee not having kicked in quite yet. Then Entombment flashed on the screen, and I froze the way a cat does when it spots the bird in the tree. I guess the piece worked as Caravaggio intended, the drama of the stark contrasts between dark and light, the altar on which Jesus is being laid extending out toward me, the haggard face of Nicodemus...suddenly I was there, burying one of my best friends.

And I was ANGRY! Even though I know the empty tomb awaits on Easter morning, I sure didn’t feel that way. I didn’t feel that it was my sin that Jesus died for, or that this was all a part of God’s plan to redeem Israel. I certainly wasn’t thinking about the divine aspects of Christ that I normally find so easy to understand. Instead I was burning for the injustice of my friend being treated like a common thief and for no good reason. And I was mad that now I’d have to leave him there in a hurry, without proper burial rights because it was the Sabbath. I was thinking about the people who did this to Jesus in 4 letter words. A few hot angry tears jumped to my eyes.

I was glad the classroom was dimly lit.

To me a dead Jesus is the most human Jesus. He was a man, a really good man, the best man, and on that horrible day his heart stopped beating, no breath went out from his lips and he was left cold and alone in a tomb. And his friends and family were devastated. No one was really thinking about what Jesus had said about his death, they were too overwhelmed by hurt, anger, and sorrow. The thought of my name never crossing those lips again, those eyes never dancing with laughter, those hands never reaching out to someone I would never touch...as we so often say, you don’t know what you’ve got until it’s gone.

I’ve been thinking of this painting a lot during lent: reconnecting with those feelings, thinking that the best Easter was the first Easter - when humanity reached its lowest lows and highest highs. Like a birthday or an anniversary, the remembrance is never as powerful as the original experience, but this painting helps me connect with that feeling that Jesus is human, and taken away, and that makes that empty tomb on Sunday so much sweeter. 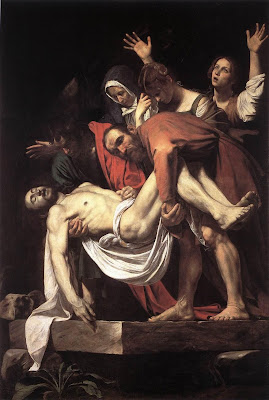