Walking towards the end

From John 12
1Six days before the Passover, Jesus arrived at Bethany, where Lazarus lived, whom Jesus had raised from the dead. 2Here a dinner was given in Jesus' honor. Martha served, while Lazarus was among those reclining at the table with him. 3Then Mary took about a pint of pure nard, an expensive perfume; she poured it on Jesus' feet and wiped his feet with her hair. And the house was filled with the fragrance of the perfume.

4But one of his disciples, Judas Iscariot, who was later to betray him, objected,5"Why wasn't this perfume sold and the money given to the poor? It was worth a year's wages." 6He did not say this because he cared about the poor but because he was a thief; as keeper of the money bag, he used to help himself to what was put into it.

7"Leave her alone," Jesus replied. " It was intended that she should save this perfume for the day of my burial. 8You will always have the poor among you, but you will not always have me."

9Meanwhile a large crowd of Jews found out that Jesus was there and came, not only because of him but also to see Lazarus, whom he had raised from the dead. 10So the chief priests made plans to kill Lazarus as well, 11for on account of him many of the Jews were going over to Jesus and putting their faith in him.

12The next day the great crowd that had come for the Feast heard that Jesus was on his way to Jerusalem. 13They took palm branches and went out to meet him, shouting,
"Hosanna!"
"Blessed is he who comes in the name of the Lord!"
"Blessed is the King of Israel!" 14Jesus found a young donkey and sat upon it, as it is written,
15"Do not be afraid, O Daughter of Zion;
see, your king is coming,
seated on a donkey's colt."

16At first his disciples did not understand all this. Only after Jesus was glorified did they realize that these things had been written about him and that they had done these things to him.

17Now the crowd that was with him when he called Lazarus from the tomb and raised him from the dead continued to spread the word. 18Many people, because they had heard that he had given this miraculous sign, went out to meet him.19So the Pharisees said to one another, "See, this is getting us nowhere. Look how the whole world has gone after him!" 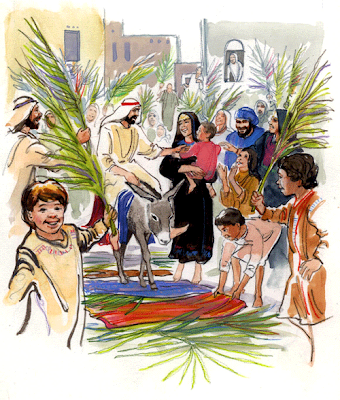