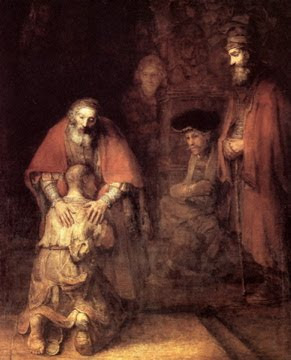 Rembrandt van Rijn, The Return of the Prodigal Son
Thought I'd continue meandering down the musical pathway that Melanie started Wednesday and which Lance continued yesterday :).
A few years ago I wrote a song for Lent. It was part of a project called Keeping Time, Vol 02, a collection of hymns, spirituals and original material on the themes evoked by the liturgical year, recorded by my jazz trio and a couple of guests. Below are my reflections on the song, which were included in the liner notes of the recording. If you'd like to have a listen, click here, then on the song's title, "Returning Home", in the music player on the right.
***
Lent is a time of coming to ourselves, of realizing the distance we have put between ourselves and God. ...Henri Nouwen said, “The spiritual life starts at the place where you can hear God’s voice.” As Jesus so wisely said, it takes ears ready to hear to really listen, and eyes ready to see to really perceive. Coming to ourselves prepares us to return home, regardless of how home is understood.
Kenneth T. Lawrence, ed. Imaging the Word Volume I